In Memory of
Sheila
Wolofsky (Callan)
2020
Click above to light a memorial candle.
Memorial Candle Tribute From
Morgan Funeral Home
"We are honored to provide this Book of Memories to the family."
View full message >>>
Send Flowers
Plant a Tree In Memory of Your Loved One
Click Here
Menu 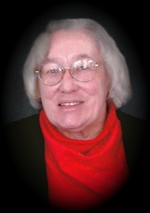 WOLOFSKY, Sheila (née Callan) – Passed away peacefully, in her favourite chair, overlooking her garden, on Friday, July 31st at the age of 91. She was predeceased by her husband of 70 years, Leib Wolofsky.
Sheila was born in Grand’Mere, Quebec. She attained degrees from both McGill and Brock and taught ESL at Niagara College. She sometimes accompanied Leib on his geological projects, spending time in many exotic countries. These experiences led to her great empathy and support for newcomers, including migrant workers in Niagara, as well as a lifelong involvement with the Niagara chapter of Amnesty International.
Sheila had an ear for jazz and classical music, an eye for art, which she collected around the world, and a penchant for connecting people. Indeed she loved writing and receiving handwritten notes and letters. And she rarely forgot a birthday!
The family would like to thank Sheila’s wonderful caregiver Deborah Remolleno, whose presence allowed Sheila to remain at home, at peace.
Cremation has taken place. A celebration of life will be held at a later date. Arrangements entrusted to MORGAN FUNERAL HOME, 415 Regent Street, Niagara-on-the-Lake. As an expression of sympathy, memorial donations may be made to Amnesty International.
Memories, photos and condolences may be shared at www.morganfuneral.com