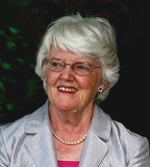 It is with great sadness that we share the loss of Ruth, our beloved wife, mother and grandmother in Niagara-on-the-Lake, Ontario on January 20, 2021. Surviving with her love in our hearts are husband John, children Catherine (Mark), James (Terri) and Elizabeth (Dan), grandchildren Emma, Peter, Lauren, Hilary, Cameron and Kate, brother Jim Aitchison in Scotland and extended family in the UK and Canada.

Born in Stockton-on-Tees, England, on July 23, 1937 to Nellie and Jim Aitchison, Ruth spent her childhood in Billingham, County Durham. Ruth was a proud graduate (1959) of the University of St Andrews in Scotland, earning a degree in History. Her fond memories of her time there prompted her daughter Elizabeth to also earn a degree at St Andrews.

Ruth became a teacher and sought adventure, applying for an overseas teaching position with the British government. She chose a post at the British high school in Cyprus, arriving in 1963. Her time in Cyprus coincided with fierce conflict between Greek and Turkish Cypriots, requiring the presence of UN Peacekeepers. In May 1964 Ruth and her friends visited the British Officers’ Club. Sitting next to them was John Hunter, a young Canadian UN Officer who had recently arrived in Cyprus. The rest is history. Ruth embarked on her next adventure and immigrated to Canada in 1965, and she and John were married soon after in Camp Borden, Ontario. Ruth taught history at the high school level for several years, until frequent army postings and a devotion to her family focused her attention on being a caring wife and mother. Ruth made lifelong friends during these nomadic times, with numerous moves across Canada and the UK. As a British ex-patriate, Ruth settled in no fewer than ten Canadian cities and towns, with her three children all born in the west (Catherine in Edmonton, James in Calgary and Elizabeth in Winnipeg).

After John retired from the military in 1980, Ruth and her family settled in Kanata, Ontario, where Ruth enjoyed a second career as a real estate agent. Kanata was home for 28 years, broken only by a magnificent five year move to Europe with John working at NATO Headquarters in Brussels and Ruth very much enjoying diplomatic life, travel, meeting people and making friends from around the world. John and Ruth retired to Niagara-on-the-Lake in 2006, bringing them closer to their children and grandchildren. Ruth loved her new home backing onto a vineyard in Niagara and took advantage of the many social and recreational opportunities that the region offered.

Ruth was a cheerful soul and brought joy to all who knew her. She was a loving wife, mother and grandmother, devoted to supporting her family’s happiness and fulfillment. She enjoyed hosting her family with everyone looking forward to her signature British dishes. She had a witty, self-deprecating sense of humour and a strong intellect. She was never far away from a daily crossword and a good mystery, and enjoyed playing bridge and watching Masterpiece Theatre. Ruth participated in fundraising and volunteer activities in Ottawa and Niagara, where she particularly enjoyed her time with the Shaw Guild. Ruth never said no to a request for help. A dog lover, Ruth is predeceased by many loyal canine friends including several rescues.

Diagnosed with Alzheimer’s disease in 2015, Ruth persevered with courage, never losing her familiar smile and pleasant disposition. The family extends its warmest thanks to the staff of Niagara Long Term Care Residence and the Alzheimer’s Society of Niagara Region. A special thank you to Kim Woods who provided compassionate care and companionship to Ruth throughout her journey with Alzheimer’s.

Cremation has taken place. A memorial service will be held later as conditions permit. Arrangements are in the care of Morgan Funeral Home, Niagara-on-the-Lake, ON (905-468-3255). Donations to the Alzheimer’s Society of Niagara Region may be made in Ruth’s memory. Memories, photos and condolences may be shared at www.morganfuneral.com

All rights reserved. This obituary is also archived at obittree.com